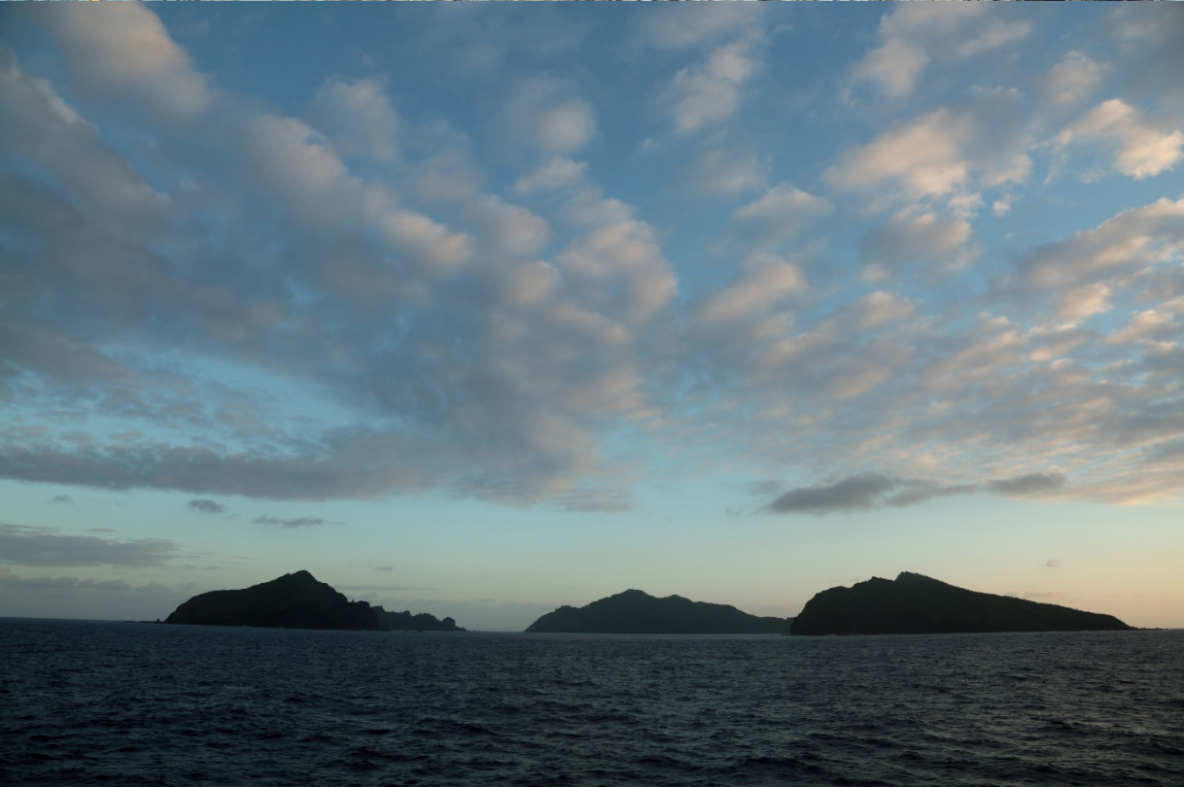 “It’s been explosive.” That is how we were greeted by the Chief Scientist as we boarded the Hi’ialakai, the research ship formerly operated by the National Atmospheric and Atmospheric Administration’s Coral Reef Ecosystem Program (CREP). As we loaded our gear and set up in the dry lab the ship was buzzing. Over the last week during their surveys of the coral reefs at Maug island, a nearby underwater volcano started erupting regularly, and even though it was 20 miles away it sent pressure waves of such force that the ship’s crew though they had run aground and the divers were wondering out loud what sort of forces their bodies could stand before they risked having their organs liquified.

We were here on a special mission to the Island of Maug, located in the Commonwealth of the Northern Marianas Islands National Monument, to study its unique coral reefs. Maug Island itself, or at least the parts of it we could see, is the rim of the sunken caldera of a massive volcano. The whole area is one of the most geologically active locations on the planet. On our way from Saipan to Maug we passed the island of Pagan, which was evacuated in 1981 when it erupted. The volcano still spews steam and ash into the sky from time to time, and only a handful of brave souls dare to live in this desolate paradise. Just 200 miles south is the Marianas trench, the deepest spot on the entire planet. Maug itself is still geologically active, and this is what we were here to study. When arriving to the island Maug one gets a very distinct feeling that this is what must feel like to be an evil villain arriving at a secret hideaway or what batman must feel like when speeding into his bat cave. A massive central lagoon is encircled by three steep islets, each rising to nearly 1000 feet above us, and with a gap between two of the islands just wide enough to let all 250’ of the Hi’ialakai pass through safely. Once inside, and completely protected from the rolling sea outside, the ship’s crew immediately sprang into action: scuba gear was meticulously assembled and inspected, boats were pulled from their seucre spots on deck and launched into the water. Within an hour of arriving to Maug we were in the water. The purpose of our trip was to study the unique lagoon at Maug, where three years prior scientists from NOAA had discovered tiny bubbles of volcanic gas rising from the sea floor. The captured some of this gas and determined that it was Carbon dioxide, the odorless colorless byproduct of the burning of fossil fuels that is at the heart of the climate crisis. A major worry of scientists is that as CO2 dissolves into the water, it will cause the oceans to become more acidic, making it difficult for animals like corals to make their hard skeletons. At Maug, the naturally occurring CO2 had already caused the waters to become very acidic, but surprisingly the coral communities were not only alive, they were thriving. Growing just 50 feet from where the gas was bubbling out of the ground was the largest coral colony any of us had ever seen, a colossal giant 70 feet tall and hundreds of feet across. Over the course of the next 6 days in a flurry of activity, our team of 19 scientists carried out an array of experiments, 3D modelling and sampling to determine why and how they corals at Maug were so healthy. We found that corals living closer to the vent could live happily anywhere on the island, but when corals living further from the vent were transplanted in the immediate vicinity of the vent they quickly sickened and died. This was exciting news, as it suggests that corals can adapt to live in more acidic conditions than previously thought … and if they had done it here, perhaps corals all over the world had the potential to adapt. Sadly, when we returned to Maug three years later, many of the corals had died from coral bleaching as a result of a warming ocean. The scene was tough to take in at times, but there were also signs of hope: that gigantic coral colony we saw on the first trip was alive and well, baby corals were abundant and surviving corals were re-growing and healthy. There are places out there that provide us the rare opportunity to look into the future. At Maug, this future looks uncertain. Corals like many other organisms have an amazing ability to change and adapt to new conditions, but this does not mean they are invincible. I have no doubt that with just a little care, coral reefs will continue to adapt and flourish for the millennia to come.